My last post about the Camino. I’m currently in Lima, Peru. I had to finish this subject before I continue my travels.

As I write this I’m in Lima, Peru. Traveling around from place to place is different from walking the Camino.  I don’t have to pick up and leave every morning which is a good feeling, but there’s a sense of urgency when you have a goal while you’re traveling. A sense of mission is common with all the other pilgrims. To continue walking whether your goal is Santiago or not.  In a normal hostel, it is a motley crew of backpackers, travelers, and tourists with different motives. Lima is no exception. It makes me miss the Camino and Spain. It will be something I will wrestle with but I digress.

I walked with Thomas and Maria for more than half of the way.  Thomas is from North Germany, near Bremen.  He is studying wood engineering.  He is a good person to walk with.  I appreciated his honesty and company when we conversed.  He has very good travel stories and dreams to travel more.  I will see him again in Dresden. They were a  few days where it rained constantly. We just went with the flow. Eventually we got past the rain and the weather was beautiful.  Seeing the coast is an amazing feeling when you have been walking inland for many kilometers.  Through rain, mud and drinking Sidra. It was some of the best parts of the Camino. 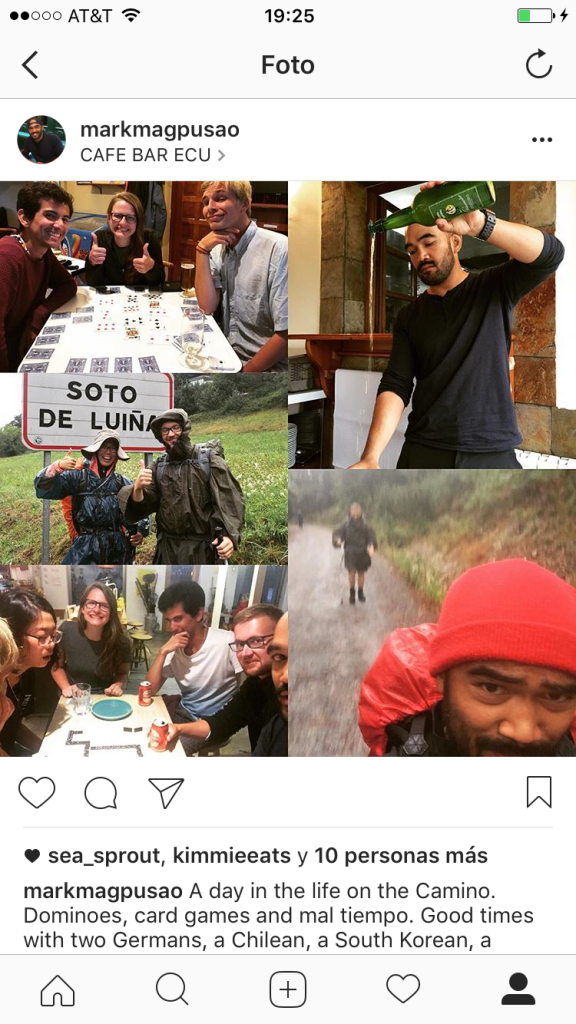 These two German ladies had stopped us and gave us all beers to celebrate the last 100 kilometers of Camino Norte.  It was a good feeling to celebrate with beers at 830am.  The last few days were just too fast to remember. Before I knew it we were one day until Santiago. It’s an amazing feeling to get to the end.

By the last 4 days or so, I walked with a core group of people. Parti, who was from Switzerland, Thomas, from Germany, Soren, from Denmark, and Maria, from South Korea. We had dinner in Santiago then Maria took a bus to Finisterre.  Parti took a bus a few days later with his girl friend to Muxia. Thomas took a bus to Bilbao for a flight back to Bremen. Soren, Thomas and I had a few going away beers his last night.

Soren and I walked to Finisterre in two days from Santiago.  It was a beautiful walk with spectacular views.  It was exhausting though. Why did I walk it in two days? Off a bet and because I wanted to push myself.  It was a hell of a last day. Soren walked with me the entire way even though he won the bet.  He said he would stop at the town before Finestera. I’ll always remember that. The fact he kept going even though he didn’t have to. That’s a friend. We parted ways the next day. The next morning I walked to the end of the world and had some long thoughts.

Originally when I finished my obligation with the Navy I was going to move to Spain.  After finishing the Camino, I changed my mind.  I want to travel to more countries before I want to settle on one place again.  I really haven’t seen the world on the terms I wish to see it. So I decided afterwards I will take a year and travel the world. I will see all the countries of most of the people I’ve met on the Camino.  So far its going well. In fact most of the contacts around the world are either through the Camino or Jiu Jitsu.

El Fin. A part of me wants to walk it again.  For the friendship and camaraderie in walking.  Maybe a piece of the Basque country, that was my favorite.

I grew up in Hayward, Ca. I am avid traveler, artist, writer/blogger, reader, grappler and language enthusiast. View all posts by Mark